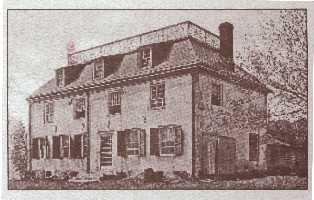 The following histories of the Glen, Groot, Van Der Bogart, Heemstraat, Du Truex (Truex) and Van Petten families are taken from several sources and cross referenced to verify accuracy. All records pertaining to these two families have come from public records.

Alexander was an agent for the West India Company when he arrived on the North American continent at Fort Nassau on the Delaware. Records also show he was later in Albany and an original settler at Schenectady.

Alexander received a land grant at Fort Nassau in 1651 and a patent for lands near Schenectady which he named Scotia.

In 1665 on the land mentioned above, which was located on the North side of the Mohawk River he build a stone house. He called his estate Scotia but this was later changed to Glenville when a town was built in the area. Glen’s house was on the opposite side of the river when the Schenectady raid occurred but his home was spared because of past favors to the French. 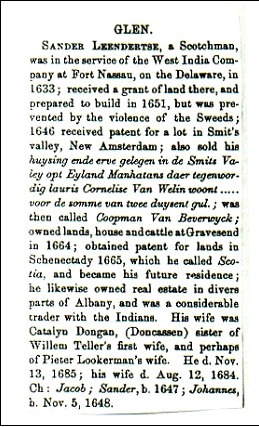 Sander Leendertse Glen – Genealogies of The First Settlers of Schenectady

Alexander married Catalyn Dongan (Doncassen) and they settled in the Schenectady area between 1658 and 1661. Catalyn died August 12, 1684. Known children are Jocob, Sander and Johannes.

Johannes Alexander Glen was born on November 5, 1648 in Bererwyck, Albany, New York. Johannes is referred to in some of the records as Capt. Glen. He married Annatie Peek on May 2, 1667.

Annatie was the daughter of Jan Peek and she died December 19, 1690. Prior to her death they had a daughter by the name of Maria Glen.

Johannes remarried on June 21, 1691 in Albany, New York. He married Diwer, daughter of Evert Janse Wendel and she was the widow of Myndert Wemp. She died April 10, 1724. He built the Sanders mansion in Scotia, New York in 1713 and occupied the house until his death.

The mansion is shown in an 1800’s photograph printed in “Glen Sanders Mansion, An Historical Overview” Copyright 1995 by Donna Masi. Johannes Glen’s property was spared when Schenectady was burned, by the order of the Governor of Canada, for kindness shown to French prisoners captured by the Mohawks. 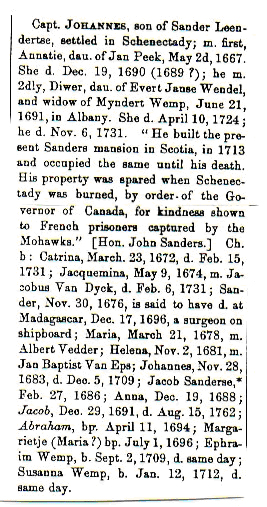 From Maria Glen the family tree goes as follows to the Clark Family:

Claas Van Petten was born on May 30, 1641 in Holland. He arrived from Holland and located to Schenectady, New York in 1664. His father was Frederick Van Petten.

In 1668 he bought, in company with Cornelis Cornelise Viele, the browery (farm) of Marten Cornelise Van Isselsteyn. This remained in the family for several generations.

In 1677 he married Aeffie Bratt who was the daughter of Arent Bratt and Catalynje De Vos. She died January 23, 1728.

Nicolaas Van Petten was the son of Claas and Aeffie Van Petten. He married Rebecca Groot about 1711.

From Rebecca Van Petten the Clark family tree is the same as listed above for the Glen family.

Symon was an early settler in what was then called New Netherland. He is described in some publications as the first settler. He was in the service of the West India Company as a boatswain on the ship “Prince Maurice.”

In 1645 he bought a house and lot in New Amsterdam. Soon thereafter he moved to Beverwyck. In Beverwyck he bought or built a house which he offered for sale in 1654.

Symon and Rebecca had nine children and on the night of February 8, 1690 all five of their sons were taken captive by the French and Indians and carried to Canada. They were redeemed the following year.

His house and lot in Schenectady was on the North side of Union Street and remained in the family for over one hundred years. 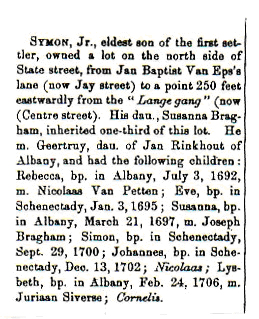 Symon was the eldest son of Symon owned a lot on the north side of State Street in Schenectady.

Rebecca Groot was the daughter of Symon and Geertury Groot. Rebecca’s date of birth is unknown, however she was baptized in Albany on July 3, 1692. She married Nicolaas Van Petten around 1711. 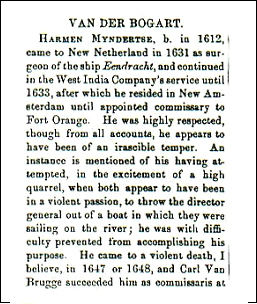 The article on the right is from the book The Abridged Compendium of American Genealogy, Genealogies of the First Settlers of Schenectady, Virkus & Company, Chicago, Illinois.

Harmen came to New Netherland in 1631 as a surgeon on the ship “Eendracht” and continued working for the West India Company until 1633. He then resided in New Amsterdam until appointed commissary to Fort Orange.

Surgeon Van Der Bogart was highly respected however, he was reported to have a temper. A reported incident had the doctor out on a boat sailing a river when he became engaged in a heated discussion with a gentleman referred to as the Director General.

Harmen in the excitement of the quarrel attempted to throw the gentleman overboard. Both men were described as having a violent passion.

It was reported that Harmen died a violent death but no details are known.
Harmen made his will in 1638 and left his property to his wife. After his death she married Jan Labbadie of Beverwyck.

Frans was the second child of Surgeon Van Der Bogart and his date of birth is currently unknown, he was baptized August 26, 1640.

He married Annetje Tjerkse and they settled in Schenectady prior to 1684. 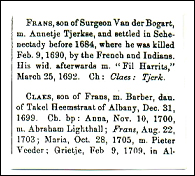 On February 9, 1690 the French and Indians killed him in a raid on Schenectady. Annetje later married Fil Harrits on March 25, 1692.

She married Arent A. Vedder and died at age 43. Her son was Frans Vedder.

Philippe was born in Roubiax, France in July or August of 1586. He was a dresser of plush or mock velvet. He married Jacquemyne Noiret, on April 1, 1593 in Amsterdam, Holland.

Jacquemyne was the daughter of Arnould and Barbe (Du Chesne) Noiret. Jacquemyne and Philippe’s fifth child (Madeleine) both died shortly after February 9, 1620.

Philippe married again on or about July 17, 1621 to Susanna Du Chesne. At the time Philippe lived in Runtstreat, Holland and was 34 years old. Susanna was 20 years old and lived in Sedan, Holland. She was listed as being an orphan.

Philippe and Susanna arrived in America in May or June of 1624 aboard the ship “New Netherland”. He and Susanna were one of the early settlers in New York, settling in New Amsterdam. Much of the information in this section was found in The Monmouth County Branch of the Truax/Truex Family by Barbara Carver Smith, Certified Genealogist.

Philippe was a court messenger of New Amsterdam appointed in 1638 by Governor Kieft. He owned land in the area and in May 1640 received a patent for property next to Secretary Van Tien Hoven’s farm in Smith’s Valley, Manhatten Island. Philippe died between July 23, 1649 and September 8, 1653 when records show Susanna was listed as a widow by an attorney having power of attorney for her.

From this it would appear that Susanne remarried and was still alive in 1654. No date of death has yet been learned on her.

Philippe and Susanna had seven children and the fifth was Rebecca.

Rebecca was born between 1635 and 1642. She married Symon Symonse Groot of New Amsterdam and later of Beverwyck, New York.